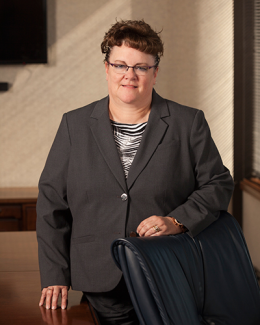 Jackie Anderson has been representing the State of North Dakota as a Special Assistant Attorney General for Workforce Safety and Insurance for over 20 years, handling administrative hearings and appeals. She has briefed and argued over 50 cases before the North Dakota Supreme Court. As part of her practice, Jackie provides advice to employers on various employment issues and has represented employers in defense of discrimination, wage and hour and unemployment claims. She has experience handling employment related cases before the North Dakota Department of Labor, Job Service North Dakota as well as several jury trials in both federal and state court. Jackie is a lifetime resident of Clay County, Minnesota, and continues to reside near Rollag. She is married to Todd Anderson and has two adult children, Elizabeth and Ryan. When not working, Jackie enjoys spending time with her family, travelling, attending concerts and sporting events. She is a 30+ year season ticket owner for the Minnesota Vikings and attends all home games in Minneapolis and an occasional away game.

Please read the following important notice, and indicate below your agreement with it, before sending an e-mail to our firm or any of its attorneys:

Unsolicited emails and other information sent to Nilles Law Firm will not be considered confidential, may be disclosed to others, may not receive a response, and do not create a lawyer-client relationship. If you are not already a client of Nilles Law Firm, please do not send us any confidential information. Time-sensitive information should not be sent through this form.